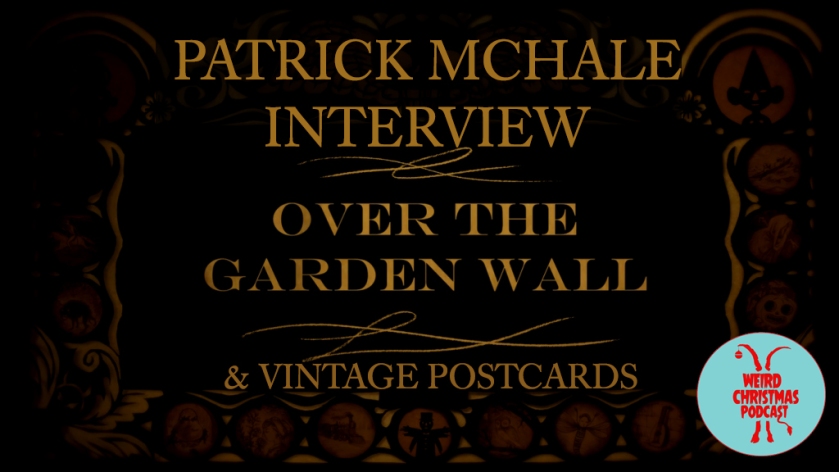 I’m thrilled to bring you a special Halloween present! I got to chat with Patrick McHale, creator of Over the Garden Wall. As many of you know, I’m a huge fan and wrote an article about how vintage postcards influenced quite a bit of the show. (here) Patrick was kind enough to take a look at what I’d found and chatted with me about what went into making the show.

And if you haven’t seen it, do yourself and favor and go watch it NOW. At the very least, you can see the pilot “Tome of the Unknown” here. It’s not quite as developed as the real show, but it will give you a taste of what you’re missing.

Watch it now! Seriously, ignore the interview and just make sure to see the show!

Now that you’re caught up, on to the goods…

Craig Kringle: I watched Adventure Time religiously with my kids (and multiple times with my younger son who adores it), and I was immediately captured by the ads for Over the Garden Wall when they first aired. I knew from the first night that it had a mood and storytelling style that I would love, so it was one of my favorite shows even before I saw more than half of it.

But then a year later, I finally found the original short with Old John Crops online. His melon car tipped me off that you had seen some old Halloween postcards, and, since I collect of old holiday postcards, I rewatched everything looking for connections. It was thrilling when Art of Over the Garden Wall came out because it confirmed that you had been looking at a lot of these things.

So how did you first come across old postcards talked about in Art of Over the Garden Wall?

Patrick McHale: I’ve always enjoyed going to antique shops, and postcards were something affordable that I could flip through and actually purchase even when I was younger. So over time I started getting a better understanding of them, and it started becoming a bit of a game to find oddball ones.

CK: What about them attracted you?

PM: There’s something about chromolithography that draws me in. [A good description of what it is at this link – Craig] I think it’s because, like wax cylinder recordings, you can feel that they’re not just reproductions of art… they’re actual recorded art. Like an actual fingerprint, rather than a photocopy of a fingerprint.  I don’t know if I’m making any sense here, but a certain era of postcards feels like it carries the ghosts of the artists and technicians who made them.

CK: That’s a great point. I often think of the postcards as early examples of mass reproduction, but the technology was still very hands-on and took artists and craftsman a lot of effort to make.

PM: Right. Same goes for old books I guess. You can literally feel the words on the page, because they were pressed into the paper, or the gold foil pressed into the leather cover. Books aren’t just a vessel for writing, they tell the story of their own creation; made of things that were once living… plants (paper) and animals (leather)… as well as earth (pigments, gold, etc)… fire and water. A book is a strange artifact. Why am I talking about books? Haha.

CK: Any favorite postcards? Or favorites that didn’t get a clear nod in the show?

Well, I have a postcard on the wall right in front of me that is a boy in a red outfit holding a sword, with a little white puppy attached to a cord. I think that’s one of the first postcards I was really inspired by, and I ended up creating this whole character and town based around him (which I haven’t used in anything yet). I guess there are too many favorites to list out though.

I tend to lump postcards and tradecards together. One of my favorite series of tradecards is for soap advertisements; a child falls into a well with some soap but is saved by all the soap suds that lift him out to safety.

Sometimes the tradecards are even stranger than the postcards. I always wondered if the artists even knew what they were drawing for. I have a series of ducks in outfits that’s being apparently used to sell baking soda – but I can’t imagine a connection. But that makes me think that part of the appeal of these things is not knowing their full original context and getting to either fill it in or wonder about it. Was that part of the aesthetic you were going for in OtGW?

Hah, yeah I think I remember hearing that there was a sort of catalogue where an advertiser would choose from pre-made art and just stamp it with their company’s name? So artists in Germany were just printing these images that they thought might sell, and then some baking soda company from Albany NY might end up using the same image as some hair tonic company in Paris to sell totally different products in totally different places. Something like that, I dunno.

Anyway, to answer your question — yes for sure. I’m hugely inspired by not knowing the context of things.

For sure. I grew up in New Jersey, and there was a lot of early American history to learn about. I remember learning that the town I grew up in used to be a great supplier of red bricks, and that my elementary school was built of bricks that had been created right there in town. And I remember finding out that the banks of the stream across the street from my friends house were full of red clay that you could fire up… the same clay that was used for those bricks. So history felt very alive and real.

So…did I miss anything that you can remember in my write up?

One of the most blatant rip-offs we did was Adelaide of the Pasture. Her design was just stolen right from postcards.

These are some of my guesses for where she might have come from…gotta add these to the other page.

Can you recall any nods to postcards in your other work (Flapjack, Adventure Time, Bags [a recent graphic novel]- which is amazing, btw) ?

Hmm, not exactly… but in one episode of Flapjack called “The Sweet Life”, I had Flapjack pulling a little toy lamb… which was inspired by an image in an old toy catalogue.

So just like you got a lot from the postcards, many people have turned OtGW into other things when it inspires them. I’m thinking of the wonderful set of Tarot Cards by QuarterPressPics which I hope you saw. I’ve got a set which I love. What’s it like to have made something that people don’t just consume and enjoy but that they develop in their own ways?

Oh that tarot card set was wonderful! Yes, its very exciting to see people be inspired by the show.

Online, there’s a very dedicated group of OtGW fans who treat it like a classic holiday special. Are you surprised it’s become such a Halloween/Autumn tradition for so many people?

It was definitely intended to be a Halloween special that could be revisited every year — we knew we weren’t making a huge international hit like Sponge Bob or something, but we hoped that the series could become some sort of cult classic. So I’m very happy that it found an audience and that people continue to enjoy it every year!

Being a fanboy, I can’t help but ask a couple cheater questions (and feel free to answer or ignore any of these): What *are* the turtles? In your mind, was there a larger mythology to the Unknown, or is intrinsically…unknown? Does “frog” George Washington/Jason Funderberger really belong with his other froggy folk instead of Greg? Is Auntie Whispers human? Does Beatrice live in the Unknown?

A lot of things are better left unsaid and unknown. I did come up with various larger mythologies, but none of them are the “real” one, and all theories are valid.  To me even Greg and Wirt’s more modern setting is still probably part of the Unknown too, in one way or another. Or not.

So when can I send you some Christmas postcards to inspire your Christmas special? 🙂

I would never say no to being sent postcards, haha! I’ve been wanting to make a Christmas special for years now. I’ve been pitching something, so we’ll see how it goes.

Ooooh! Any hints about that? Or if you don’t want to give that away, are there any holiday specials (animated or not) tha you’re particularly fond of?

I probably can’t say much, and who knows if anything will come of it, but it definitely shares some DNA with Over the Garden Wall. As far as holiday specials, the main specials I watched as a kid were the Garfield one and the Will Vinton one. I must have taped them off of the TV, because I remember watching them a lot. My favorite holiday movie, which is not exactly a holiday movie at all, is probably Little Women (1994).

A few friends sent me some questions, too:

Do Greg and Wirt have last names?

They do! They have different last names. But I don’t know/remember what those names are.

Was there an initial image, character, or scene that spawned OtGW?

It’s a mixture of tons of stuff, but a book called “The Complete Optimist” (1912) was a huge visual inspiration for the series in its early days.

Do you have a favorite character or scene after all this time?

I like the frog. It could have been fun to make a whole series about the frog’s backstory; I pitched a concept for that to CN back when OTGW premiered, but they weren’t interested, haha. Which is probably for the best, because I definitely wouldn’t have wanted to compete with the frog world in Amphibia.

I wanted to just say that I loved Bags, too. You talked in the intro about it being not really a full story, but I thought it captured a wonderful sort of disturbing-yet-cozy loneliness. (Or something like that. And it’s hardly the same thing, but it was a mood I’ve only ever really felt in the 1986 film “When the Wind Blows.”

Thanks! Writing the original book for Bags was one of the most satisfying and pleasant creative experiences I’ve ever had.  There was no audience in mind, it was really just written for the joy of creating it. Usually I’m stressing out about how to make something that will please an audience, but I didn’t worry about that with Bags. So it’s always nice when someone enjoyed it despite its experimental nature.

In regards to “When the Wind Blows” — Wow, I’ve never even heard of it! I don’t know how I missed it. The man in that actually looks almost exactly how I pictured John Motts.

Anything coming up or out soon you’d like us to look out for?

Well, I co-wrote Guillermo Del Toro’s upcoming adaptation of Pinocchio… but it’ll be quite a while before that comes out. None of the other stuff I’m working on has been announced yet, so can’t really talk about it unfortunately.

I really appreciate you taking the time to talk about this, and I can’t wait to go watch Over the Garden Wall again.

….. and if you enjoyed this post, consider buying me a coffee. It helps support the contests, podcast, and to get all the cards ultimately uploaded and searchable.