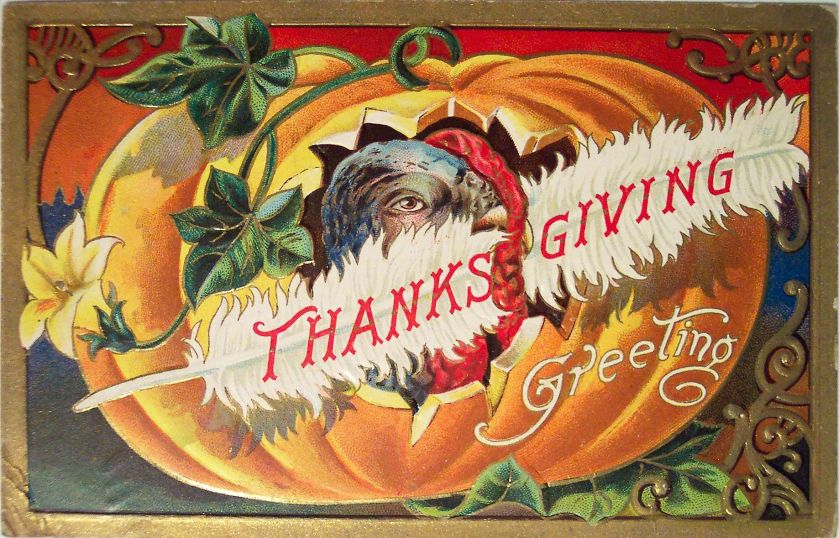 I don’t like these at all. They scare me, deeply.

I don’t know if anyone else will be disturbed by these, but I should explain: I’ve seen a LOT of vintage turkey pictures. I’ve thumbed through countless Thanksgiving postcards in real life and online, and I see trends that may not be intentional. I notice patterns that I start to see everywhere: a certain tilt of Santa’s head, naked Valentine cupids positioned just so to hide only the actual genitalia but to give a nice view of the pudenda, New Year’s pigs smiling with the exact same smile. I am totally John Nash in A Beautiful Mind before the meds kick in.

But these…I think these were intentionally made by a small number of artists specifically trying to infect my dreams with terror.

I’m pretty sure these were by the same artist, even though some seem to be from totally different series. But they all have something in common that I just can’t look at for very long before the uncanny valley gets too deep.

These turkeys have human eyes. Once you notice it, you can’t unsee it. And it’s not just a lazy artist who’s only ever seen pictures of turkeys and is having to fudge bits here and there. This is someone intentionally putting human eyes on turkeys. And they’re doing it because they know it gets to me in just that way!

This was the first one I found. It was so underscored, literally just the eye peeking out over the text. It saw parts of me I hadn’t even shown myself. It was like a mirror and a spotlight on my secrets, and I wanted to shut it out.

At first, I could just say that one artist had done something bad — it was a fluke, of course. Sloppy drawing that just looked at me in a way not intended and with no malice of forethought.

Soon, though, it became clear that the eyes were not an accident. The past was hunting for me. I was the object of their revenge. I was going to be made to stand for the justice of all turkeys slaughtered for this season. Nevermind that my family is (mostly) vegetarian. They weren’t intersted in individual justice. They wanted a symbol. And I had been chosen. I had been seen.

Then I found it. That final card that told me all I needed to know. They had prepared the ritual. They were coming. They were still here. They were waiting. Their eyes saw me through the years, and one day, they would see me in person. And I’d hear this song. Sound before sight. They knew me because I mocked their fate. They didn’t understand that making fun of their images on postcards was a way to protest their injustice. They were not subtle. They had no use for irony. We had taken their flesh, and they wanted my flesh in return.

This final card was my doom:

I hope there’s still time. If they find me, I hope I can close my eyes before…

No. I must close my eyes.

If you like the cards and the podcasts, consider subscribing on Patreon. I’m putting out podcasts all year round, most with Christmas info but also major and weirder holiday stuff throughout the year. There are also other treats like real postcards sent you throughout the year and other treats. Go to Patreon and search for Weird Christmas or just click here: