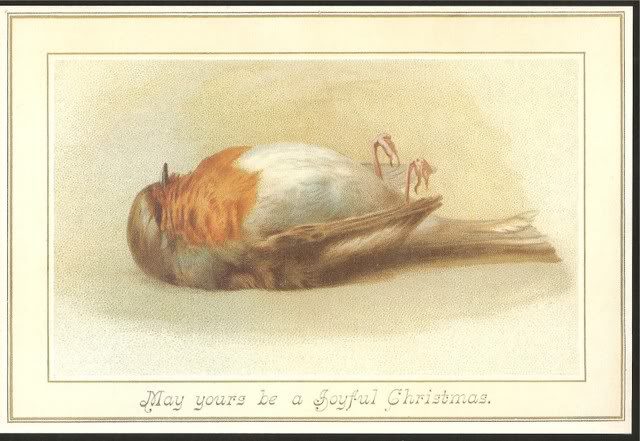 The dead bird cards seem to be making the rounds more than usual this year. I haven’t seen any new write ups about them (yet), but they’re coming from a bunch of different directions on Twitter and Tumblr.

So I thought we should revisit and add to what I said here. (Check it!)

So, just to keep the tally, I know of four Victorian Christmas cards that feature dead birds:

Then there’s one general well-wishing card:

After that, there’s also this thing, although I assume they’re more drunk than dead. (Don’t miss the guy in the bowl):

But dead things of all sorts were fairly common on Victorian cards. For example, who could forget the ever-popular “Frog Murder Christmas” card, which is always the most popular thing I ever share?

I still stand behind my close reading of this card from another post, but I found another possible explanation that I actually think has some weight. Christopher Davis thinks this might actually be a Christ/Judas allegory of sorts, with the bag of cash being like the 30 pieces of silver. (though why then “2000”? Who knows…) But, if you’re gonna be serious, that makes more sense than anything else I’ve heard. (He also mentions Wren Day as the explanation for the dead bird cards, but I POSTED THAT TWO YEARS BEFORE HIM SO I WIN THE INTERNETS!)

But it’s not just frogs. There also this, which gives my cat-hating heart such joy that I don’t really need an explanation:

Before I get hatemail from cat lovers, don’t worry. The rats got their comeuppance when the feral sprite people went hunting:

And don’t forget the frogs! You can’t have Victorian Christmas without frogs.

Gotta admit that I’m not sure if they’re actually dead. But the poem does mention coming to “grief” and…is that blood underneath them? Why make the reflection red rather than green?

Then when I found this thing, I thought I’d finally hit pay dirt:

But, unfortunately (well, unfortunately for me), it’s not a dead person, but either a toy or a scarecrow or something. It’s a wooden “man.” But the point seems to be something about sympathy for cold/lost things. (Although if this is part of some other story or legend that I’m just not catching, please let me know!)

Unless I’m forgetting something, that’s all the dead animal cards I know of. You can find plenty of things being cruel to each other like this:

But cruelty and death seem significantly different themes, so we’ll leave it there.